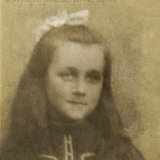 An essay by Norah Pankhurst (nee Tree).
Although a somewhat idealised account, it is a good record of the Tree family at home.
One day stands out in my memory, Christmas Day 1913. The one before the 1st World War and the last time I hung my stocking up. I was twelve years old and of course not a believer in Santa Claus, but my younger sister Eva being only seven years of age still believed in that fantasy, I just went along with her to help make the dream come true. She was fast asleep when my older sister Ulundi came into our room just before midnight to put our gifts into the black woollen stockings we had hung on the end of our bed … I pretended to be asleep but as soon as my sister had finished her task and gone from the room I crept out of bed to feel my full stocking. The only thing that I could make out in the dark was an umbrella. I felt so thrilled and thought I would never be able to wait until morning came. However at last I fell asleep and was awakened by my little sister saying “Quick Norah look what Father Christmas has brought!” She had books, games, sweets and a doll made of wood which she promptly called Wooden Betsy, but I had my lovely black umbrella, my very first, a little bible, prayer book, hankies and sweets Some of the gifts were from our older brothers and sisters who were unable to be with us at Christmas.

I suddenly felt so very grown up. Of course Eva didn’t think my gifts so exciting as her own were, by my sister Priscilla who was fifteen did and she had probably seen them all before we had. We each had a new dress and pinafore. My mother paid into a clothing club all the year and bought them for us. I dressed quickly and went downstairs to give the little gifts I had bought for my family. There were six wine glasses that cost one penny each for my mother and father, a penny packet of Woodbines for my brother, a hat-pin and hairpins for my sister costing only twopence, and I gave my sister Ulundi who was an apprentice dressmaker one yard of figured muslin for a blouse which cost 2¾d a yard.

After breakfast I went to Sunday School which was held in Foots Cray School. Taking most of my gifts with me, even my umbrella although it was a fine morning … After Sunday School I went for a walk with two friends. We sauntered along Foots Cray Lane, past the lovely old church and as far as the Rectory. Then home to a scrumptious dinner. My dear mother worked so hard to ensure that we had an enjoyable time although as children we didn’t even think about it, but I did in later years when doing the same for my own family. In the afternoon my father prepared a Snap Dragon, a dish of muscatels and almonds with sufficient brandy poured over them to enable it to be set alight. We then had to grab into the blue flames for them and those who were afraid or not quick enough didn’t get many … By then we were content to sit quietly and read or play writing games and inevitably eat fruit, nuts and sweets until tea-time.

Relatives and friends arrived in the evening and we had such fun singing around the piano … My grandfather and father had really good voices leading us all in the singing. Everyone had to do their party piece, which caused a lot of amusement. We played games and charades, enjoyed by all and we were all allowed to stay up for supper, a great treat for the younger members of the family. No family could have had a more enjoyable day.

The memory of this lovely Christmas remains with me so clearly, as the next four Christmases were marred by war, with so many members of families away in the Forces and unable to get home, and I know that I have never recaptured the magic of my last childhood Christmas.