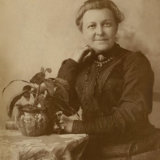 THE BLOODLINE OF MARY EMMA SERCOMBE:
FAMILY FORTUNE AND MISFORTUNE
In 2014, when sorting through some very old family photographs I became curious about my great-grandmother Emma Tree and began to do some genealogical digging. Her maiden name was Mary Emma Sercombe, and I wondered why I knew nothing of her parents and her immediate ancestors the Sercombes and Kings (her mother’s family name). Mary Emma died in 1922 and was my grandmother’s fondly remembered mother, and therefore was, until my grandma Norah died in 1991, in living memory. By all accounts a kind, intelligent, educated and hard-working woman, Mary Emma endured with resource and fortitude a difficult early life and in marriage the hardship caused by an errant husband.

The unravelling of Mary Emma Sercombe’s family tree has revealed a fascinating bloodline. It encompasses wealth acquired from medieval land-grabbing, and from sugar plantations and slavery in Antigua. There are Quakers, medics and lawyers, incidences of lunacy and desertion, a haunted portrait and a death by pricking with a fern. We find cavaliers, mariners, scholars and clerics, inheritance of wealth and conversely disinheritance and poverty, and in the nineteenth century two instances of admissions to the workhouse. And when Mary Emma married into the Tree family, the trade of basket making. The Tree bloodline can be traced back with certainty to the mid-eighteenth century, where we find them then making baskets (a trade probably continued from generations before) and the family business carries on until the early twentieth century.

Mary Emma’s great-grandmother was Elizabeth Otto-Baijer who married Thomas Filmore Sercombe, and we find the names Otto and Baijer carried forward to the next generation of the Sercombes, as is money inherited by Elizabeth from her brother’s sugar plantations in Antigua. The Otto-Baijer name is of Dutch/German origin, and the Sercombes came from Exeter in Devon before settling in London in the nineteenth century. Her grandmother was Emma Giffard (pronounced Jiffard) who was one of three Giffard sisters who married three Sercombe brothers in the early nineteenth century; a fourth sister married her cousin in the Giffard line, and in each case the surname and other names historically related to the Giffards are carried forward in the given names of their children. Giffard is a name of Norman origin and can be traced directly from Mary Emma back to the year 970.

Quite a bit of detective work was required to discover an outline of the life of Mary Emma’s mother Mary Hannah King, whose maternal ancestors were Quakers - the Hesters, who hailed from Buckinghamshire and settled in the City of London in the eighteenth century, with trades such as shoemaker and barber. The life of her father Henry Auton Giffard Sercombe, a mariner, remains in part elusive. It is probable that Henry deserted his wife soon after Mary Emma‘s birth, and her mother Mary Hannah remarried several years later. After her mother’s death at the age of 37, Mary Emma was left orphaned and three years later alone and pregnant in London at the age of 18. She later married George Tree, by whom she had ten more children, nine of them surviving infancy, and one of whom was my own grandmother.

I have confined myself to the research of what appear to be five significant bloodlines: the Sercombes, the Giffards, the Otto-Baijers, and the Hesters/Kings, from all of whom Mary Emma is directly descended; and the Trees, the family into which she married. As a matter of genealogical discipline, I have ended the first four bloodlines at Mary Emma herself, and ended the Tree history with her grandchildren, the generation born between 1914 and 1934.

The research of each bloodline is set out in standard genealogical format. Surnames are capitalized to avoid confusion with given names. A paragraph outlining birth, marriage and death/burial dates for each person and his/her spouse is followed by facts obtained from verifiable written, photographic and (very occasionally) verbatim sources. Abbreviations are used where a word is recurrent, and there is a key to these. Typically, there is more written evidence available about men than women, with a few exceptions - for example when there is a published Will, as in the case of Elizabeth Sercombe (nee Otto-Baijer), or a newspaper report in the case of her daughter Ann. There was also more historical information about the Quaker women than is usual because of the Quaker tradition of keeping very thorough records of births, marriages and deaths, in which even those present at a birth are named, and all wedding guests are listed on a marriage document.

Some repetition of entries from the UK census 1841-1911 occurs, particularly in the early lives of the Kings and Trees, but I decided to retain them within each generation so that it is possible to pick out any individual and find all recorded information without cross-referencing.

I am indebted to Daniel Morgan who compiled a website devoted to the Sercombe family name, and it was he who set me on my own genealogical journey by pinpointing the earliest known Sercombe ancestor in my own bloodline, Robert Southcom, born about 1615 in Devon (see appendix 1).

I also owe special thanks to my cousin Sue Parkins for her encouragement and inspired sleuthing during the several years spent researching this project, and also to subsequent readers of this website who have contributed valuable information and photographs.

Many hours of research and writing have gone into compiling the information on this site, not to mention the cost of online subscriptions, personal visits to archives and travel to places of interest and relevance to my research. Many more hours have been lavished on digitally restoring photographs. An acknowledgement would be very much appreciated if you want to use any of the content, written or visual, for your own genealogical studies.